I’m amongst the many thinking about something that happened this last week in South African journalism. On September 19, 2012 a digitally altered photograph was published on the front page of The Citizen, a national newspaper. Bodies seen in the debris of the blast in Kabul in the original wire photo by AFP, were removed in The Citizen’s reproduction of the photo. 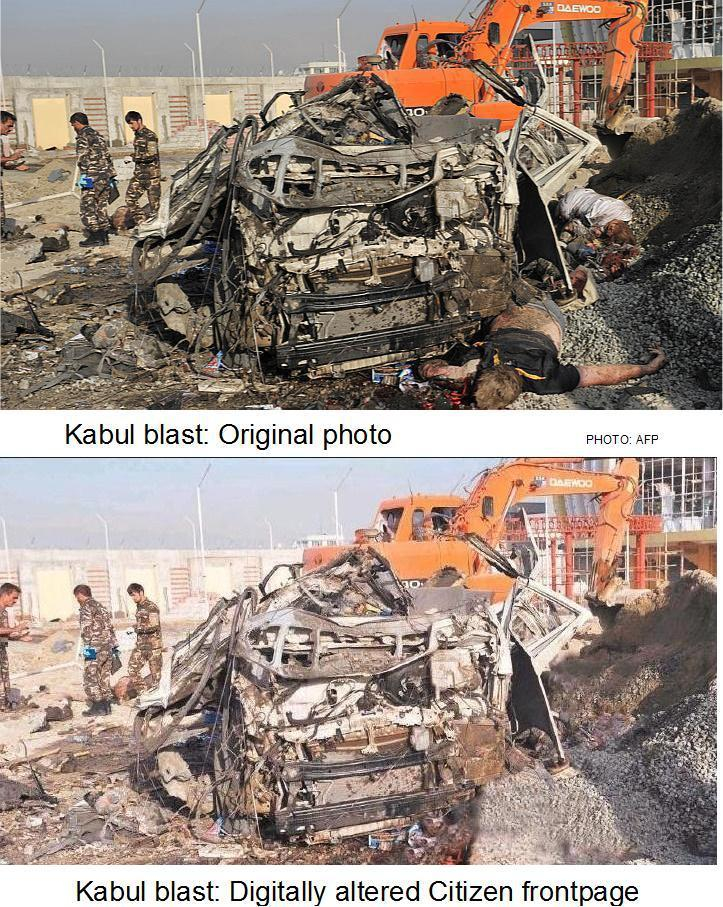 The image above, which came to my attention through social media, shows the differences.

It’s impossible to reach a position without full information. My thoughts aren’t an attack on The Citizen’s ethics but rather a call to debate practice. I’m not privy to what went on behind the scenes last week at The Citizen. The word on the ground is that the suspended staff member is the photographer who leaked news of the manipulation on social media. The Citizen doesn’t reveal the charges or identify the staff member in their statement.

But, this moment opens up bigger questions affecting journalism as a whole. While blurring elements in a photograph may seem like a viable answer to a thorny question, I firmly believe this practice of blurring the images should be interrogated.

Why not choose another image from the same scene? Or choose to let the story run without a photograph? Who gets to decide who gets blurred out? The blur doesn’t hide the gore, but acts to sensationalise it. What’s unseen behind the blur? The mind begins to race….

Blurring is often used to hide sexually explicit content or people charged with crimes on the basis of protecting either the viewer or the subject. The blurring technique filled the hole left by the black strip across the eyes technique. Remember that? The black strip across the eyes device is no longer widely used and is largely regarded as stigmatising to the subject.

There are plenty of ways to make identity protected photographs. There’s no need to blur or pixelate images in postproduction, one composes the photograph in a way that protects the identity of the subject. How we choose to represent people matters. This blurring practice needs to be deconstructed and engaged with, and this week’s events at The Citizen should be a catalyst for that.